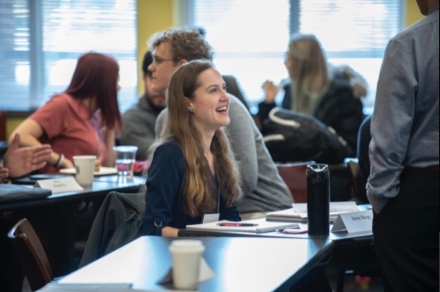 On November 8th, the 19th Annual Steven Humphrey Undergraduate Philosophy Colloquium was held in Louisville, KY and featured Sienna Murphy ’21. Sienna presented her paper titled “Credibility Excesses as Cases of Testimonial Injustice“ during the colloquium. The colloquium was featured on Louisville’s The Voice Tribune, you can read about it here.

Sienna sent us the abstract for her paper:

How credible we take a person to be largely depends on our own prejudice. Our judgements can either benefit or harm the person targeted depending on if they embody a stereotype that works for or against them. Miranda Fricker argues that judgements only truly harm the person when we give them less credibility than they deserve, constituting an instance of Testimonial Injustice. In this paper, I challenge Fricker argument and display instances where harm can also occur even when we give the person more credit than they deserve. Ultimately I argue that credibility excesses play a far more central role in testimonial injustice than Fricker claims.

And she reflects on her experience attending the colloquium:

Presenting at the colloquium was an incredible experience! This is my first time presenting at any conference, and it was such an amazing opportunity to not only share my work outside of my university, but also to meet other young philosophers and learn about their passions in the philosophy field. The conference lasted one day with 8 undergraduate speakers and one keynote speaker. We were each given 20 minutes to present, followed by a 15 minute question and answer session. Presenting was an invaluable experience. It was wonderful to share my work outside of my university. In a way, I felt like it was the first time my philosophical work actually had an impact on people other than myself and my professors, and that was an extraordinary feeling! Additionally, it was wonderful to get so much feedback on my paper.

The Louisville philosophy department was extremely welcoming and supportive. Not only did they provide the funding for all of our travel and accommodation expenses, they also generously hosted a reception afterwards at the home of Steven Humphrey. This allowed me to socialize with the other presenters and the faculty members in the philosophy department.