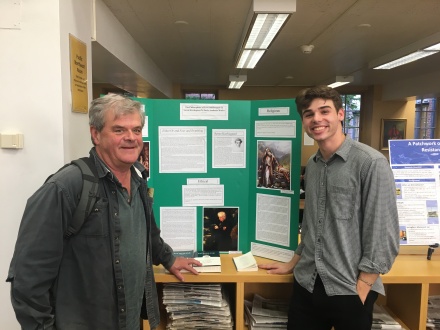 James Conley, a ’20 Philosophy major, embarked on his summer research project last summer to explore Søren Kierkegaard’s works in depth. (For more information on Summer Research Grants in Arts, Humanities, and Social Sciences, look here!)  Here, he provides details on his project and his experiences working on it:

My summer research project focused on Danish philosopher Søren Kierkegaard’s early aesthetic works. Kierkegaard published two of his most enduring books, Either/Or and Fear and Trembling, in 1843, at the onset of his career. The content of these books is not traditional systematic or analytic philosophy, but rather pseudonymous accounts of life, love, value, and experience, akin to literary fiction, from three primary pseudonymous characters invented by Kierkegaard. The three pseudonymous characters embody three conflicting existential perspectives or modes of living that Kierkegaard wanted to highlight and set against each other dialectically in the mind of his reader. His intention was to develop the subjectivity and self-understanding of the reader in an indirect and inward way, something not possible in an analytic, critical philosophical project. These existential perspectives are the aesthetic, the ethical, and the religious, represented in Either/Or: Volume I, Either/Or: Volume II, and Fear and Trembling respectively.

In order to understand Kierkegaard’s existential dialectic, my research narrowed in on one central theme salient in each of the three accounts. This theme is love. My research culminated in a paper detailing the philosophy of love of each of the three pseudonyms and juxtaposing them in order to gain insight into Kierkegaard’s project. The aesthetic philosophy of love, embodied and valued by the first pseudonym in Either/Or Volume I, is akin to a refined hedonism. Love, for the aesthete, is only valuable and existentially effective in its romantic form and as long as it provides pleasure or distraction. The ethical philosophy of love embodied and valued by the second pseudonym in Either/Or Volume II, values social conventions and institutions, such as marriage, presupposing a roughly Hegelian belief that commitment to and identification with the universal conception of ethics is fundamentally important and the highest mode of living. The religious philosophy of love, discussed by the third pseudonym in Fear and Trembling, values a subjective and fully faithful relationship with God and a subsequent experience of earthly love and desire founded in faith.

My interest in Kierkegaard was sparked initially by my time spent studying abroad in Copenhagen in the fall of 2018. Copenhagen is the city where Kierkegaard lived most of his life. He often wrote poetically about his surroundings and used the city as an illustrative device for his philosophy. My immersion in the city left a deep and insightful impact on my philosophical growth and understanding of one of the most important philosophers of the 19th century. Thank you, Copenhagen.

I was aided in my project by the University of Puget Sound philosophy department. Specifically, Sara Protasi, my academic adviser who helped me apply for the research grant, and William Beardsley, my research adviser, who spent many hours with me discussing and helping me to understand Kierkegaard and helping write my research paper.