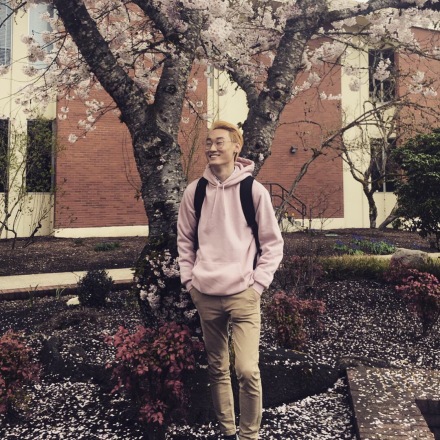 Brian Kim ’21, a double major in Philosophy and Economics with a minor in Sociology & Anthropology, presented his work at the annual Pacific University Undergraduate Philosophy Conference. The conference was held from April 5–6, 2019 in Forest Grove, Oregon. Brian presented his paper, “A Critique on the Historical Interpretation of Pirates.” In addition, his paper will also be published in Res Cogitans, Pacific University’s undergraduate philosophy journal. Here is an abstract of his paper:

Brian reflected on his experience at the conference by saying:

Overall, I thought that the conference was an invaluable, enriching experience! This was my first conference that I presented at and it was fascinating not only to listen to a plethora of interesting and important philosophical topics, but also to get a further look into philosophy culture and meeting unique individuals from all over the States. It was a good experience to not only go to a conference, learn how to present, and to figure out what to do, but also to practice engaging critically both for my paper and for others. I met some amazing people, especially the students from PacificU, and had an amazing time not only sharing my passions with like-minded individuals, but to also learn about different styles of philosophical thought and practice.
​The conference accepted over 50 different papers and was broken into three 2 hour windows. Within these windows, there were different rooms which each had three papers presenting for 40 minutes each. After a paper was finished, you had a brief window to go to a different room in order to see other papers. At the end of the paper sessions, philosopher Susan Haack presented her topic on a metaphysics in response to the over accepted paradigm of scientific realism. An important thing I noticed overall about the conference was on my own stamina to philosophy. I would like to think of myself as deeply passionate for almost any philosophical topic and could easily go hours discussing even the most trivial issues. But I learned that there is an important lesson in pacing yourself and closing conversations in order to pursue other topics. I found this out about myself after hour five of philosophy conversations, with only a few hours of sleep under my belt, that I have only so much mental energy to offer in one day!
Overall, I would highly recommend submitting papers to every conference you have the chance to submit to as it is an extraordinary experience to venture into the philosophy undergrad culture and to meet some amazing philosophical minds, as they become exceedingly harder to find nowadays!