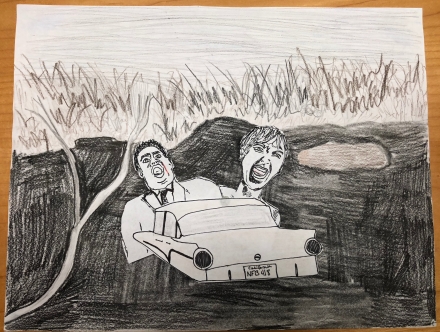 In Fall 2017, Professor Sara Protasi taught the course Philosophy of Film and Performing Arts. Throughout the course, students philosophically approached questions such as: What is film? What are the differences and similarities between film and other arts such as theatre, dance, and music? What explains the emotional involvement audiences have with the characters on screen?

At the end of the term, students were asked to engage in a creative project of their choosing. The goal of the project was to allow students to research and engage with a topic discussed in class but express their findings in a creative way. Some students collaborated on short films, some did a series of drawings, and others wrote a series of film reviews.

Another significant aspect of the group’s drawings is that they all contain some sort of moving part. For Sperry, the moving parts suggest that the movie scene is evolving. In her drawing of supporting characters in Psycho (1960), Sperry depicted the swamp where Norman Bates dumped both Marion Crane and the detective.

This piece further supports Knight’s argument for a “global structure” in the fact that at the beginning of the film, the audience thinks that Marion is going to be a main character, and while she is in the sense that the film revolves around trying to find her, she dies too early to really establish a connection with her. The detective who is murdered is held to the same importance as Marion…and he is merely a supporting character. Their deaths are just pawns in the story of Norman Bates who is the murderer.

In his drawing, Schuling focused on one particular scene in The Silence of the Lambs where Catherine is being held in a well by serial killer Jame “Buffalo Bill” Gumb. He describes how identification is used in this scene:

Identification is key in this scene for the building fear to be effective in inciting emotion – the audience is made to put themselves in Catherine’s shoes, and as Deborah Knight suggests, “mentally simulate” the state of mind of the victim. It is more than just sympathy, for we fear for Catherine in the same way she fears for herself, we fear with her.

In this piece, the paper gradually unfolds to expand the depth of the well Catherine is in. Schuling used moving parts in his work to symbolize film; films are a series of moving pictures, so by taking a static drawing and adding a moving part to it, he attempted to represent the nature of film. Schuling describes his drawing by saying:

I chose to depict this desperation through identification and mental simulation by painting Catherine in the well. I chose to color her in black and white, using somber watercolors to represent helplessness. The deepness of the well unfolds above her as she realizes the reality of not being able to escape, and the folds are tied with the rope she uses to attract Precious to the well, the rope that ultimately is her lifeline. 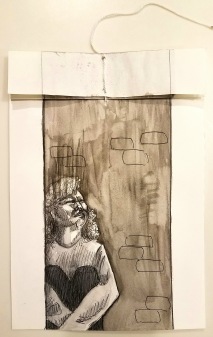 Another group (Duncan Long, August Malueg, Keegan Kyle, Claire Harbutt, and Colleen Hanson) collaborated on a short film called Wrong Fiction Writer. This short film addressed the class topics of authorship, genre, and identification. The film is about an author who sells his dramatic screenplay to a production company and becomes enraged when it is turned into a comedy production. Collaborator Colleen Hanson describes the film more in depth:

The main class topic that our film Wrong Fiction Writer addressed was that of authorship. In La Politique des Auteurs, Truffaut puts a heavy emphasis on directors as authors of film. Our film does not address authorship in terms of the director, but rather it emphasizes the role of the author of the screenplay. In our film, the author is a bit bashful delivering his screenplay to the executive, but upon discovering that his work has been turned into a comedy, he confidently takes ownership of the screenplay. He asserts himself to the actor who plays Jim Poz – not the director or the executive (like most would be inclined to do). This confrontation suggests an objection to Sarris, who proposes an evaluative approach to authorship. The evaluative approach asks, “who is responsible for a film’s goodness or badness?” In Wrong Fiction Writer, the author seems to think Jim Poz is responsible for the film’s badness. Other evaluators might have argued that the executive or director was responsible for allowing the genre change.

To use auteur theory we are expected to either simply know aesthetically and narratively what is good and what is bad (which is problematic in a variety of ways) or adhere to the ideas put forth by the film community. The aim of this project was to show that the third premise of Sarris’ auteur theory is not necessary and, in fact, hinders a more interesting conversation. I put together a list of 14 films made by 14 different directors, some of which would easily be called auteurs, while others might not make the cutoff. The goal of this project was to show that the auteur theory is useful and can be applied to a wide range of films and directors.

Grantham’s series of film reviews can be found on this database.