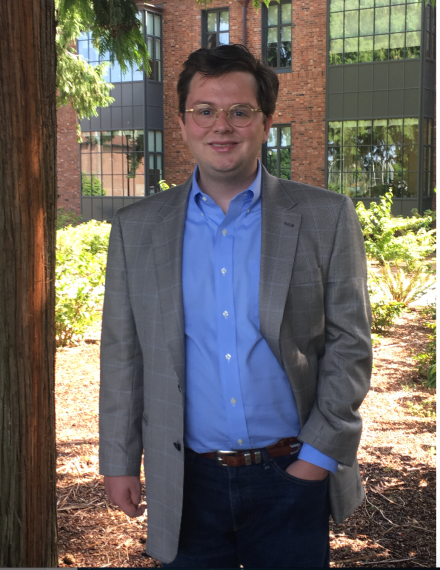 As the Class of 2018 prepared to graduate, we wanted to hear from philosophy graduates about their time as philosophy majors at Puget Sound. Peter O’Meara ’18 majored in Philosophy and minored in History. In the summer of 2016, he completed an internship at the Institute of Ideas in London.

How did you get interested in philosophy in the first place?

That is the question I have never been able to answer quite clearly. There was no book I read, no person I heard speak, not even a class that I took. It just came to me. I know that no one is endeared by such a vague answer, but that is how it was. It was a primal feeling from the start.

When and why did you ultimately decide to become a philosophy major?

Formally, I believe it was some time during my senior year of high school. In retrospect, I suppose I had not given a great deal of thought to that course specifically. Rather, it was merely a natural progression of the passion itself.

How did your parents and strangers react when you told them you were a philosophy major?

My parents did not have any bias, surprisingly; they were supportive from the very start. The challenge that I have endured came not from any opposition to the major itself, but rather how to best utilize it in the pursuit of the path. I want to get my Ph.D., yes, but how to forge the best profile? This has made itself apparent in more recent years. I have found myself increasingly in a state of mind that emphasizes the “golden lining” of one’s resume. That is, in order to appeal to the tiers I am aiming for, I have been forced to consider all avenues of potential success, even if it is distant from my chief interests. My parents have at times emphasized the raw intrigue of combining my major with neuroscience, law, and the like. It has been frustrating on occasion, especially as I have struggled to put into words just what my areas of interests are. It can also be especially frustrating when you feel like sometimes others do not understand just how frequent and “close to home” your chosen path is; when you say that it must be done every day, and you mean nothing less than that. This is not to disparage such a strategy, nor the actual pursuit of alternate venture within the discipline. Philosophy can be integral with used in tangent with either, and I wholly support it.

Is there an area of philosophy that interests you the most?

As it currently stands, I am enthralled by the notion of variety, specifically on a metaethical level. I wish to explore how it is that variety interferes and interacts with morality. To that end, I may also pursue the questions in metaphysics, as well as normative ethics. I am also highly curious about human sexuality, and its own subsequent ethics, though I do not yet know how it will figure into my central path of inquiry.

What about those areas are interesting to you?

Much of my interest comes from my frustration with Mill’s rule utilitarianism. I am myself a deontologist. For a doctrine that aims to be a communal morality, it seems content to leave many people behind. I am mesmerized by that which deals with the most and least of something; the majority and the minority. How everyone ought to be accounted for no matter what. Further, within a moral being, there exists the idea of being an “expert” in something, yet not in other things. I am captivated by the idea that one does not need to be an expert or scholar of something (for the sake of clarity, morality), but it is evident to them, at least given the appearance of thorough consideration juxtaposed with holding a belief that is not as scrutinized, that there exists an ethical breach that is not disconcerting. That which appears to be at a glance merely a case of weakness of will, yet indicates a more nuanced perception of morality. I do not mean to be so abstract. This is actually a line of inquiry acquired only a few months prior, and I have had difficulty putting it into clearer terms.

As I am trying to formalize my interests, I believe my interest in variety initially stemmed from questions I have regarding sexuality. I have long been fascinated with its grip on humankind when compared to other “base desires”. It is a visceral feeling to deal with something that is considered quite personal and normal, yet to desire to subject it to philosophical scrutiny all the same.

Has your study of philosophy informed your day to day life or how you make decisions?

I practice philosophy every day. It is the only way to stay on top of it. The greatest revelation, one could argue, is that philosophy truly is everywhere. No one and nothing is exempt from it. It is legion. On a less poetic note, though, I do indeed inform my decisions everyday using philosophy. I do not believe in “keeping work at work”. I frequently find myself asking how I could do something which entirely concerns everyday life if I am not actually going to act as I say. That is one of the grand ironies of philosophy, I find. It is something which concerns everything, and yet is easy to keep locked away in the Ivory Tower. No matter how abstract something might be, I do everything to try and integrate it into routine.

What was your favorite philosophy class?

Ha! That is like picking children! In truth, I could not choose a single class, as it has all been instrumental in developing the way I think and pursue philosophy, and I cannot imagine being without their respective teachings. That said, if I had to name one in which I feel that many of the skills and axioms attained were demonstrated, it would be one of the last two classes, “Topics in Knowledge and Reality”, during my spring semester of senior year.

How has your minor and/or other major shaped your philosophical studies and vice versa?

My minor was history, and while I cannot say that there has been a great deal of interaction between the two thus far, I look forward to seeing how that arises in time.

Do you have a particular memory as a philosophy major at UPS that stands out to you?

During my senior year, I was taking a “Philosophy of Emotions” course with Professor Protasi. I had a reputation for run-on sentences and highfalutin language. As such, she challenged me to answer the daily writing prompts using no more than fifteen words per sentence. Though difficult at first, I was able to keep to this throughout the semester, and as a result, I found that my writing improved drastically. There was one instance, however, when I ended a sentence with the word “entelechy”, which, though a stretch, I thought at the time captured what I was trying to say. After submitting, I prepared to go to class, and the Professor walked by, having read the post. She stopped, looked at me and remarked “‘Entelechy?’ Really, Peter?”. Once again, my manic logophilia got the better of me. I will treasure that moment forever.

Do you have any advice for current philosophy students?

Firstly, the dictionary is not your friend! If you are asked the question “What is good?”, the worst thing you can do is look it up and offer it as part of your explanation. While it can be helpful for certain terminology, do not rely on it to get you far in philosophy. Secondly, philosophy must be practiced outside the classroom every day. This is not to say you are thinking about it constantly, but it is the only way to improve and to learn how philosophy is meant to have a chief place among decisions and day-to-day life.

If you ever want to know if you are passionate about philosophy, you must be willing to speak about yourself a bit morbidly. Can you ask yourself “Can I live without this?” or can you say “I give myself wholeheartedly to this?” Perhaps you might even say to yourself “I have been called to the holy work (and nothing less)”. If you can do these things, do not fret, because even when people react with fright and worry, you will be able to rest in the knowledge that such words belie the most relentless optimism.